Unidentified Wiki
Register
Don't have an account?
Sign In
Advertisement
in: Male, Homicide by stabbing, Homicide by beating,
and 16 more

Frank "Frankie" Little Jr. (1943 - c. 1979) was an African-American guitarist and song writer whose partial remains were discovered at a business in Twinsburg, Ohio on February 18, 1982. He was last seen alive in the mid-1970s and is now believed to have been killed in or around 1979.

He was identified by the DNA Doe Project in mid-December 2021.

The partial remains were discovered behind a business that is now closed by an employee. Initially, a skull was found but a garbage bag containing bones was later discovered roughly 40-50 feet away.

There was evidence of stabbing, blunt force trauma and post-mortem burning on the victim's body. He had also been dismembered before being placed into the garbage bag.

Investigators believed he could have been from outside Ohio, and possibly be from the Detroit, Michigan area.

In the 1960's, he was the guitarist and a songwriter for the R&B band, "The O'Jay's". The band's leader, Eddie Levert, said that he had moved with the band to California during the 60s, but later moved back to Cleveland to connect with a girlfriend.

In February 2020, it was revealed that the decedent may have ancestral ties to Laurens County in South Carolina. The DNA Doe Project expanded on this and said that he may have ties to Spartanville County or Greenville County, South Carolina as well as Brooklyn, New York and Washington D.C. 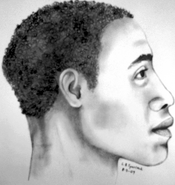