Unidentified Wiki
Register
Don't have an account?
Sign In
Advertisement
in: Female, Homicide by asphyxiation, Homicide by beating,
and 14 more

Hill was fifteen years old and was allegedly murdered by her adoptive mother after a long period of abuse. Hill had several other children in her household.

A day after her death, Erika's body was found in an abandoned garage. She had been suffocated and beaten to death and then burned, which left her remains in an unrecognizable state. An identifying attribute of the female is that she had many scars on her face, in various stages of healing, that had occurred before she was murdered.

Her mother pleaded guilty to reduced charges in July 2016 and was sentenced to 20 years in November. 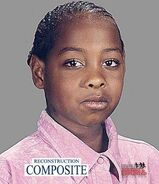