Unidentified Wiki
Register
Don't have an account?
Sign In
Advertisement
in: Male, Killed in action, Cases with Wikipedia articles,
and 12 more

Emil Joseph Kapaun was a United States Army Captain and a United States Army Roman Catholic chaplain during World War II and the Korean War. He was captured on November 2, 1950 and died on May 23, 1951. His remains were returned to US custody in 1953 and identified on March 2, 2021.

Emil Kapaun was born on April 20, 1916 to Austrian-Hungarian immigrants Enos and Elizabeth Kapaun in Pilsen, Kansas. He grew up on a farm three miles southwest of town on rural 260th Street. He graduated from Pilsen High School in May 1930, from Conception Abbey Seminary College in Conception, Missouri in June 1936, and from Kenrick Theological Seminary in St. Louis, Missouri in 1940.

On June 9, 1940, Kapaun was ordained a Roman Catholic priest of the Diocese of Wichita in Wichita, Kansas. He celebrated his first Mass at St. John Nepomucene Catholic Church in Pilsen. In January of 1943, he was appointed auxiliary chaplain at the Herington Army Airfield near Herington, Kansas and was appointed pastor in December.

In August of 1944, Father Kapaun entered the US Army Chaplain School in Fort Devens, Massachusetts and graduated from it in October. He began his military chaplaincy at Camp Wheeler, Georgia where he and one other chaplain ministered to about nineteen-thousand servicemen and women.

Later he was sent to India and served in the Burman Theater between April of 1945 and May of 1946. He ministered to the US soldiers and local missionaries and sometimes traversed a nearly two-thousand miles a month via a jeep or plane. During this time, he was promoted to captain in January of 1946. After his stint in India and Burma, he was released from active duty in July of 1946.

Under the GI Bill, he earned a Master of Arts degree in Education at Catholic University of America in February of 1948. In September 1948, he returned to active duty in the US Army and resumed his chaplaincy at Fort Bliss, Texas. In December 1949, Father Kapaun left his parents and Pilsen for the last time, bound for Japan.

After arriving in Japan in January of 1950, Father Kapaun became a chaplain in the 8th Cavalry Regiment, 1st Cavalry Division. He often performing battle drills near Mount Fuji, Japan. On July 15, 1950, the 1st Cavalry Division left Tokyo Bay and sailed for Korea, less than a month after North Korea had invaded South Korea.

Three days later, the 1st Cavalry Division made the first amphibious landing in the Korean War. The Division was tasked with slowing the North Korean Korean People's Army's advance until reinforcements could arrive. During one of these skirmishes, Kapaun and assistant learned of a wounded soldier stranded during a retreat. Knowing that no litter bearers were available, the two braved enemy fire and saved the man's life, for which Father Kapaun was awarded the Bronze Star Medal with a "V" device for valor.

Eventually the KPA pushed US forces back into a perimeter around Pusan, South Korea. Still, Father Kapaun continued to make rounds to encourage and pray with the soldiers of the 8th Regiment, with his main complaint being the lack of sleep for several weeks at a time. In September of 1950, United Nations Command Forces landed on Inchon and drove the KPA northward. On October 9, 1950, the 1st Calvary Division crossed the 38th parallel into North Korea and captured the capital of Pyongyang and advanced to withh in fifty miles of the Chinese border. During this phase of the war, Father Kapaun developed a reputation for bravely serving soldiers, rescuing wounded and deceased, ministering by performing baptisms, hearing confessions, offering Holy Communion, and celebrating Mass on an improvised alter set up on the front end of a Jeep that was destroyed by enemy fire multiple times. In his letters home, he shared that he was thoroughly convinced that the prayers of others helped him survive.

On November 1, 1950, the Chinese People's Volunteer Army took their first part in the war by beginning the Battle of Unsan near Unsan, North Korea. Nearly twenty-thousand PVA soldiers of the 39th Corps attacked the unprepared 8th Cavalry Regiment. Father Kapaun stayed behind with eight hundred other men while the rest of regiment retreated. During this battle, he braved enemy fire and rescued about forty men. He and other survivors of the 3rd Battalion were captured and marched eighty-seven miles to a temporary prison camp at Sombakol near the permanent camp (Prison Camp 5) at Pyoktong, North Korea. Father Kapaun was able to persuade some prisoners, who had ignored orders from officers, to carry the wounded. Overall the Battle of Usan proved one of the most devastating losses to the United States Military with a thousand and four-hundred and forty-nine casualties, and five-hundred and thirty casualties from the 15th Infantry Regiment of the 1st Infantry Division of the Republic of Korea's Army.

Life in Prison Camp 5 was hard for its prisoners, with sometimes up to two dozen prisoners dying from malnutrition, diseases, and exposure to the elements. Despite these horrid conditions, Father Kapaun refused to give up and devoted himself to the other prisoners. He dug latrines, mediated disputes, and gave away food to raise prisoner morale. Additionally, he would steal food for the men to eat, stand up against communist indoctrination, smuggle dysentery drugs to Dr. Sidney Esensten, and led men in prayer. At one point, a US Sergeant First Class named Herbert A. Miller was about to be executed, but Father Kapaun shoved the executor in time, saving Miller's life.

Father Kapaun eventually developed a blood clot in one of his legs and suffered from dysentery and pneumonia. He was taken to the prisoner hospital where he died of malnutrition and pneumonia on May 23, 1951. His remains were buried near the Yalu River.

Father Kapaun was one of twelve chaplains to die in the Korean War, four of which were captured in 1950 and died in captivity. He was posthumously warded the Legion of Merit and the Purple Heart by the US Army for exceptionally meritorious conduct as a prisoner of war. He was also awarded the Medal of Honor, Legion of Merit, Bronze Star Medal with "V" Device, Prisoner of War Medal, American Campaign Medal, Asiatic-Pacific Campaign Medal with Bronze Service Star, World War II Victory Medal, Army of Occupation Medal with Japan Clasp, National Defense Service Medal, Korean Service Medal with two Bronze Service Stars, Combat Infantryman Badge, Republic of Korea Presidential Unit Citation, United Nations Korea Medal, and the Republic of Korea War Service Medal. Father Kapaun was awarded the Medal of Honor for his saving the forty men and Miller's lives by then-President Barack Obama who presented the medal awarded on behalf of Father Kapaun's nephew at the White House on April 11, 2013.

As part of the 1953 Korean Armistice Agreement, Father Kapaun’s remains were among the thousand and eight-hundred and sixty-eight who were returned to US custody in Operation Glory, but they were not able to be identified. His remains were buried at the National Memorial Cemetery of the Pacific in Honolulu, Hawaii, around 1956. His remains were disinterred and identified as part of Defense POW/MIA Accounting Agency’s Korean War Disinterment Project, a seven-phase plan begun in 2018, to disinter all remaining Korean War Unknowns from the NMCP.

On March 4, 2021, US Senator Jerry Moran and the Catholic Diocese of Wichita confirmed that the remains of Father Emil Kapaun had been identified.

Surviving prisoners of Prison Camp 5 reported remembering Father Kapaun for his, "great humility, bravery, constancy, love, kindness, and solicitude for his fellow prisoners." "He was their hero... their admired and beloved "padre." The prisoners considered him their hero and many converted to Catholicism because of him. After his death, Catholic servicemen, laymen, and women from the US to East and Southeast Asia would offer devotional prayers to him. He was named a Servant of God in 1993 by Pope John Paul II. Being a Servant of God is the Vatican's first step toward possible canonization. Between 2006-2011, several miracles were attributed to his spirit.

Several memorials and namesakes, including the Chaplain Kapaun Korean War Memorial Site, the Father Kapaun Memorial Technical School in Kwanju, South Korea, and some Knights of Columbus Councils have been named after him. 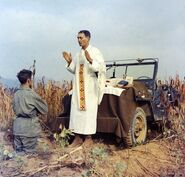 Father Kapaun celebrates Mass using the hood of his jeep as an altar, as his assistant, Patrick J. Schuler, kneels in prayer in Korea on Oct. 7, 1950, less than a month before Kapaun was taken prisoner. Photograph provided by Col. Raymond A. Skeehan.