Stabbing
"Eklutna Annie" was the nickname given to a teenager or young woman whose skeletal remains were discovered in Eklutna, Alaska. She is a confirmed victim of serial killer, Robert Hansen. 15 women have been ruled out as being the decedent as of May 13, 2021.

Eklutna Annie's bones were found buried alongside a power line, near the grave of another victim. She had been stabbed in the back, which Robert Hansen admitted to after she made an attempt to escape his vehicle. Hansen elaborated that she was either a topless dancer or a prostitute. Although he stated that Eklutna Annie may have come from Kodiak, however, others believe that she may have come to Alaska from California. 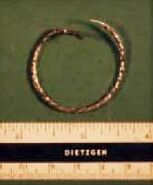