Desoto County Jane Doe is a woman found murdered on January 24, 1985 in Olive Branch, Mississippi. Per NamUs, sixteen women have been ruled out as the victim.

The victim was found by a truck driver driving southbound on US Highway 78 a hundred feet east of Coldwater River Bridge at around 7:30AM. Her body was twenty feet south of the highway and her shoes, undergarments, and jacket were missing. She was strangled with a ligature and possibly sexually assaulted.

During the mid-1980s, up to eleven women and girls, including this victim, were found dead near the southeast highways of the United States. It has been speculated the killer, dubbed the Redhead Killer or the Bible Belt Strangler, preyed on women who were either prostitutes and/or transients who were estranged from family. In 2019, it was announced deceased trucker Jerry Leon Johns was responsible for Tina Farmer's murder in 1985. Johns was convicted for kidnapping and assaulting a redhead woman named Linda Schacke in 1985 in a similar manner to the killings, but it is not clear if he is being investigated for the rest of the murders.

The victim is now buried at Blocker Cemetery in Olive Branch. 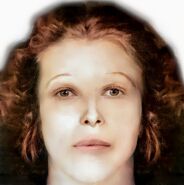