Unidentified Wiki
Register
Don't have an account?
Sign In
Advertisement
in: Featured cases, Male, Homicide by beating,
and 16 more

Beating
Derek D'Alton (February 27, 1940 - c. 1947) was a child who was located deep within Stanley Park in downtown Vancouver, British Columbia alongside his brother in 1953. According to DNA analysis, they were both male, and brothers, contrary to an earlier belief that the pair consisted of a male and female. While unidentified, they were known as the "Babes in the Wood".

It was announced in May 2021 that the Redgrave Research were contacted to assist with genetic genealogy in hopes to discover their identities and in February 2022, they were identified as brothers David D'Alton and Derek D'Alton.

The remains were found by a park gardener named Albert Tong in a brush-filled area of the park near Beaver Lake. The bodies were lying in a straight line with their feet close together and their heads in opposite directions. They had been covered by the remains of a woman's oilskin coat.

At the scene they found:

Investigators were certain that the two were a boy and a girl, or a boy and a young woman, based upon the clothing found at the scene. Medical examiners also mistakenly concluded that it was a boy and girl, both of different ages but under 10 years old. It was not until 1998 when the case was reopened and DNA analysis performed, that they were revealed to both be male, a fact which almost certainly hindered the original investigation and identification of the boys.

The year of their death is also uncertain. Based upon the amount of foliage at the scene, and the style of shoe that the children had been wearing (which were believed to have been imported from Asia, and not sold in Canada until after the Second World War, although this has since been proven incorrect), police placed their deaths sometime during the Fall of 1947. There is some evidence, based upon witness reports, that their deaths may have occurred in 1949/50, or as early as 1944.

In the 1980s, the remains were discovered to have been placed in an exhibit at the Vancouver Police Museum. When the case was reopened, in the 1990s, the investigator in charge took DNA samples from the boys and cremated their remains, scattering them in the water off of Kits Point. The museum now has replicas of the skulls and bones on display, along with the articles found at the scene.

A man who worked in a logging camp reported that, in 1949 or 1950, he and his friend had picked up a woman with two children. During the ride, she had told the men that she had been in trouble with the Mission Police for vagrancy (or possibly "Vag C", meaning prostitution) charges. They learned that either one or both her children had attended Cedar Valley School and that she lived on Cherry Street in Mission, B.C.

The only description available for the woman is that she had red hair. The two boys who were with her were about 6 and 7 years old and at least one wore an aviator flying helmet. Using this information, the police managed to find the family name of Grant, but this lead was exhausted after speaking to surviving family members.

In May 1944, a sailor from Esquimalt and his fiancée were walking along the seawall surrounding Stanley Park when a woman crashed out of the bush in front of them, wearing just one shoe and no coat, and letting out a guttural sound. When she noticed the couple, she took off running.

This lead was discounted at the time, as it was believed that the boys would not have had that style of shoe in 1944. However, it was discovered that the shoes would have been available in Vancouver before the end of the Second World War, and it is therefore now being looked into to see if any boys had gone missing from school around that time.

One of the boys' shoes

Sketch of the bracelet the older boy was wearing 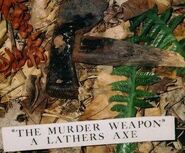 Casts of skulls at the Vancouver Police Museum

Exhibit at the Vancouver Police Museum