Unidentified Wiki
Register
Don't have an account?
Sign In
Advertisement
in: Male, Homicide by beating, White,
and 12 more

Harold Dean Clouse (June 7, 1960 - c. December 7, 1980) was a man found murdered alongside his wife Tina Clouse in 1981. The pair were later buried next to Michelle Garvey, who was found in 1982 and identified over thirty years later. Their infant daughter, Holly, was discovered alive in Oklahoma in June 2022.

Dean and Tina married in June 1979. They left their home in New Smyrna Beach, Florida home for Texas in 1980 so Dean could pursue a career in carpentry work.

After their move to Texas, his sister received a call from a group saying they would deliver his car to her address in Florida if she paid $1,000. She agreed, and the car was delivered by three women wearing what appeared to be religious robes. They stated that the family had joined a religious group and were cutting ties with them. 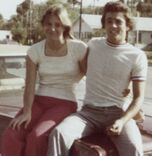