Unidentified Wiki
Register
Don't have an account?
Sign In
Advertisement
in: Male, Homicide by strangulation, White,
and 12 more

Daniel Wayne "Danny" Dewey was a teenager found murdered in 1979 in Louisiana. He disappeared a few months before his death after he and his siblings became homeless. He was never reported missing.

He was identified in 2008 after his fingerprints had been entered into FBI Database- it matched with Dewey's arrest report, when he was detained for misdemeanor concerning riding a motorcycle back in 1979 in Baytown, Texas. 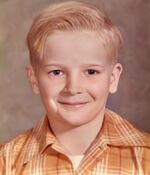