Unidentified Wiki
Register
Don't have an account?
Sign In
Advertisement
in: Male, Cause of death not stated, Hispanic,
and 18 more

Not stated
Daniel Diaz Reyes is the possible name of a man whose partial skeletal remains were found in a desert in Arizona in 2020 as the man had a Mexican ID card bearing that name.

His NamUs profile was removed in or before September 2021 and has not been re-established, indicating that he has been identified.

In early February 2020 a post (in Spanish) on a public Facebook group dedicated to sharing information about missing people from Latin America who was last seen or heard of attempting to cross illegally the border between Mexico and the United States, shared photos that appear to be the same person in the Mexican voting card found with the decedent, along with the name Daniel Diaz Reyes.

Extra information was also provided stating that Daniel Diaz Reyes was missing from Oaxaca, Mexico and that he was last seen between June 10th and June 15th, 2019 around the Mexico-Arizona border in the state of Sonora, Mexico. He had told his relatives that he would try to cross the Mexico-US border.

However all this information, as well as the name of the decedent have not yet been verified by authorities, nor has it been verified that the person in the Mexican ID found with the decedent is the same person than the decedent himself, and 'Daniel' remains listed as an unidentified person. The Facebook post indicates he has been located deceased.

Belt found with the remains 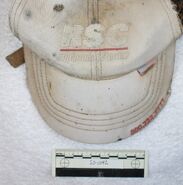 Hat found with the remains
Community content is available under CC-BY-SA unless otherwise noted.
Advertisement