Unidentified Wiki
Register
Don't have an account?
Sign In
Advertisement
in: Female, Death cause undetermined, 1991 discoveries,
and 14 more

Cynthia Merkley (also known by the last name Bilardi) was a woman found in California in 1991. She was identified in December 2018 and her identity was released in March 2019.

Merkley's body was discovered in a field in Vacaville, California during a construction project. Her cause of death remained undetermined. Asphyxiation has not been ruled out, and there is conflicting information regarding whether homicidal violence is suspected.

She was estimated to be between 25 and 35. She had died weeks before. Because of the position of the clothing on her body, she may have been sexually assaulted.

Merkley was estranged from family members and was never reported missing, after her 1980 divorce and loss of child custody. She was identified through fingerprint comparison. Before her death, she lived in Santa Cruz and Santa Rosa, California. 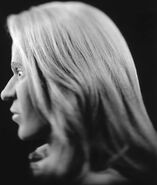