The victim may have been hitchhiking, possibly indicating he was either a runaway or a transient. He had been incarcerated in jail and was released a day before his death. The potential lead of the work schedule was followed to a company in Missouri, but no employee records matched the subject. 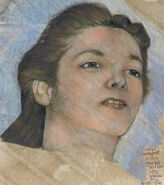