Unidentified Wiki
Register
Don't have an account?
Sign In
Advertisement
in: Male, Homicide by gunshot, Formerly missing people from Mexico,
and 11 more

This article or section may have been copied and pasted (or closely paraphrased) from another source. Please adapt this information by editing this article to remove any non-free copyrighted content.

Christian Alfonso Rodríguez Telumbre (born circa 1995) was a young man who was one of the 43 students abducted on September 26, 2014 in Igula, Mexico by local police and cartel members. His remains were located in 2019 and were identified in 2020.

Christian Alfonso Rodríguez Telumbre grew up in Tixtla, Mexico. His mother, María Telumbre, made tortillas at home and sold them and his father, Clemente Rodríguez,  delivered jugs of water from the back of a pick-up truck. Rodríguez-Telumbre wanted to go to college to study agronomy, but because his family could not afford it, he went to the tuition-free Rural Normal School of Ayotzinapa, which was near Tixtla. His responsibilities as a new student included work on planting crops, tending the school animals, and help raise funds for the school's activism by taking over highway booths by soliciting donations and commandeering buses to carry students to events.

Rodríguez-Telumbre was one of about a hundred students who commandeered several buses at 6:00 PM in order to travel to Mexico City to comemmorate the 1968 Tlateleco massacre. On the way there, the were stopped by Iguala municipal police force at around 9:30 PM reportedly on the orders of the mayor José Luis Abarca Velázquez by using gunfire and roadblocks. A chase between the buses and police ensued in which six people were killed, three of which were civilians in unrelated buses or taxis. After the shootings, 43 students, including Rodríguez-Telumbre, were arrested by the police and turned in to the police in Cocula. It is then believed the students were given to Guerreros Unidos, ("United Warriors"), a criminal gang that splintered from the now-defunct Beltrán-Leyva Cartel, and were presumably killed.

In January 2015, former Attorney General Jesus Murrillo Karam said it was the “historic truth” that the bodies of the students, including Rodríguez-Telumbre's body, had been incinerated in a huge fire at a garbage dump in Cocula and their ashes were tossed into the San Juan River. However, this version of events have not been accepted by experts and the families of the students. Rodríguez-Telumbre's mother specifically said in 2014, “How is it possible that in 15 hours they burned so many boys, put them in a bag and threw them into the river? This is impossible. As parents, we don’t believe it’s them.”

Since the mass kidnapping, eighty suspects, forty-four of them police officers, one of them being Iguala's police chief Felipe Flores Velásquez, have been arrested. Iguala Mayor Abarca Velázquez and his wife have been named the masterminds behind the kidnappings by Mexican authorities although neither have been put on trial for it. In June 2020, the leader of the Guerreros Unidos, José Ángel Casarrubias Salgadoalias, alias "El Mochomo" was arrested for and is believed to be responsible for the mass kidnapping and murder of the students. Some have accused the Mexican Federal Police and the 27th Infantry Battalion of the Mexican Army to have been involved, with journalist Anabel Hernandez claiming two of the buses held heroin the students did not know about and the said-battalion's colonel was ordered by a drug lord to intercept the drugs; the students were killed because they were witnesses to the event. This has not been proven yet, however.

The mass kidnapping and the lack of answers to what happened has also drew international condemnation and protests. Rodríguez-Telumbre's father has been a "fixture" at families’ protest marches demanding justice. The Inter-American Commission on Human Rights assembled a panel of experts who conducted a six-month investigation in 2015. They concluded the that the government's claims on the matter were "scientifically impossible".

In November 2019, an area 800 meters from the dump was searched and skeletal remains were recovered at Butcher's Ravine in Cocula. Analysis showed the remains belonged to at least two people. The remains were sent to the University of Innsbruck in Austria for DNA analysis. Although, many of the remains could not be tested or had an incomplete genetic profile, some of the remains were identified as those of Christian Alfonso Rodríguez Telumbre. It was noted that Rodríguez-Telumbre's remains were not exposed to fire, disproving the "historical truth". Omar Gómez Trejo, head of the special unit of the Attorney General’s Office, made the announcement on July 7, 2020, and also announced that the case is still open. 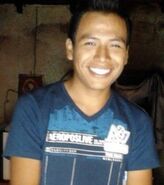 Demonstrators holding posters of Christian Rodríguez Telumbre, protesting the lack of answers in his case and the other 42 student's cases.