Michelle "Chelle" Evon Carnall-Burton was a woman who was found in Lincolnville, Kansas on September 21, 1987. Her wrists and ankles had been bound with rope. Additionally, it is believed she died between June 21st and August 10th.

According to a Radford University article, serial killer Larry DeWayne Hall has been named a suspect in her murder. Hall is speculated to be responsible for the disappearances and murders of up to forty-five women during the 1980s and 1990s and is currently incarcerated at a North Carolina federal prison for the 1993 kidnapping and murder of Jessica Roach. He has not been charged for any other murders besides Roach's, however.

She was identified in December 2019 by the DNA Doe Project. 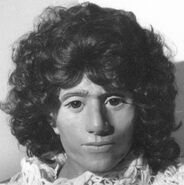