Cecelia "CeCe" Barber Finona was a woman whose remains were found in Clark County, Nevada two years after she went missing from her home in New Mexico.

She was identified in late June 2021 with her identification being publicly announced early the following month. Her ex-boyfriend, Jerry Jay, is currently being charged with her murder.

On June 1, 2019, Finona's family arrived at her residence to visit only to find her vehicle and purse left behind instead of her. Blood was found trailing from the bottom of her porch to the driveway with a single eyeglass lens being found within the trail. Deeply concerned for her wellbeing, Finona's family immediately contacted authorities and reported her missing.

Immediately, foul play was suspected in her case from the evidence found. After mentioning that Finona had been arguing with her boyfriend the night before when her family last saw her, Jerry Jay became a suspect and was subsequently taken into custody on June 5 after using Finona's debit card at an ATM in Las Vegas. Jay had also been recorded withdrawing from the decedent's debit card in New Mexico and Arizona overall amounting to over $1,200.

Two years later, in February 2021, remains were found in Clark County, Nevada by a local citizen under unknown circumstances. 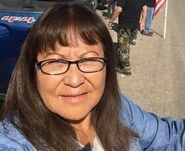