Unidentified Wiki
Register
Don't have an account?
Sign In
Advertisement
in: Male, Homicide by asphyxiation, 2011 deaths,
and 9 more

Hughes' body was found wrapped in a green blanket on the side of the road in South Berwick, Maine on the evening of May 14, 2011. An autopsy determined that the cause of death was by suffocation.

A blue Toyota Tacoma pickup truck with a U.S Navy license plate frame was seen on the road shortly before his discovery.

A tip was sent in to the Massachusetts State Police about a car matching the description of the Tacoma seen at a rest stop in Chelmsford, Massachusetts. Police then took Julianne McCrery in for questioning after finding her in the Tacoma in Chelmsford. While in custody, McCrery told police that she had killed her son and contemplated killing herself after driving up from Irving, Texas to New England. The boy was later positively identified as McCrery's son Camden Hughes.

McCrery stated to police that she had gave Hughes a lethal dose of cough syrup in a motel in Hampton, New Hampshire and then suffocated him with a pillow. McCrery then drove up to South Berwick and dumped his body on the side of the road.

McCrery was arrested and charged with murder. On January 13, 2012, McCrery was found guilty of second-degree murder and sentenced to 45 years in prison. 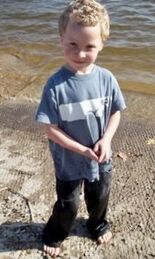