Bronx John Doe was a man whose remains were found in an abandoned building in 1989. 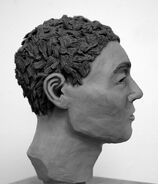