Unidentified Wiki
Register
Don't have an account?
Sign In
Advertisement
in: Female, Cause of death not stated, People found in Illinois,
and 15 more

Over 250 women were ruled out as the decedent, prior to her identification in 2022, with the aid of Othram, Inc.

Brenda Sue Black last made contact with her family at an unknown date between 1980 and 1981. Following the completion of her high school education, she relocated from Vandalia, Ohio to an unspecified location in California. Black had been reported missing, having been entered into NamUs in May 2015.

Brenda's body was found along Interstate 80 near New Lennox around a year after she died. No clothing was at the scene. Plant growth had concealed the partial skeleton, and it was noted that the body may have been transported to the scene with a vehicle after her death.

Examination indicated the woman was between 23-40, most likely 25 or older, and an injury to the right side of her nose happened at some point during life. Her height was approximately 5'4 to 5'5. After an initial clay facial approximation was created, the FBI produced a rendering around 2014, and a revised bust was later created and released in August 2021. Additionally, an age regression was released in 2016, which was based on the 2014 reconstruction.

Othram became involved in her case in the early 2020s, in hopes that genetic genealogy could identify the remains. A week prior to the 41st anniversary of her discovery, it was announced that the company had successfully identified the remains as Black. 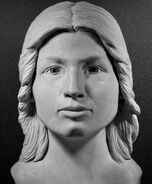