Unidentified Wiki
Register
Don't have an account?
Sign In
Advertisement
in: Male, Homicide by beating, White,
and 13 more

Bradley Bussewitz AKA Bradley Adair is a man whose body was discovered near Hilo, Hawaii on November 2, 2003. He was identified via fingerprints on April of 2016.

Bradley Bussewitz was born in Wisconsin. Between 1988 and 1989, he lived on the Hawai'i Island. In 1996, he was known be living in San Luis Obispo, California. He was living on Maui Island May of 2003 prior to returning to Hawai'i Island and lived at various locations around Hawai'i Island including Puna, South Hilo, Ka’u, North Kohala, and Kona. His primary modes of transportation was an early model Chevy Lumina van of an unknown color and riding a bicycle.

Bussewitz's sister, Pam Eklund, described her brother's lifestyle as nomadic. He liked to grow his own food, was a vegetarian, and also played the didgeridoo, an Australian wind instrument. According to Eklund, "He was a poet, a pacifist, and a vegetarian. He was a lover of the earth. His dream was to own a small piece of land in Hawaii and be able to grow his own food and be self sufficient." While moving around, he sent his family letters and a lot of times, there would be no return address. It was not unusual for his family to go several years without hearing from him. As recently as 2014, his family would check death certificates and assumed he was alive when none for him showed up.

On November 2, 2003 after 9:00 AM, a hunter discovered a homicide victim in a remote area at the 11.9 mile area of Route 200 at Saddle Road[1] near southern Hilo, Hawaii. The cause of death was attributed to blunt force trauma to the head and he was believed to have been killed one to two weeks prior to being discovered. Despite his remains being decomposed, especially at the upper torso, his fingerprints and DNA were able to be recorded. At the time, no matches in the AFIS could be made and the case went cold.

In 2016, Detective Derek Morimoto was assigned to the case. After learning of the FBI's NGI database, he sent the fingerprint records to the Hawaii Criminal Justice Data Center in Honolulu, Hawaii. In April of 2016, the fingerprints matched to Bradley Bussewitz's.

Bradley Bussewitz's homicide remains unsolved. It is under investigation by the Hawai'i Police Department under case number H-69230. Crime Stoppers is offering a $1000 reward for information. 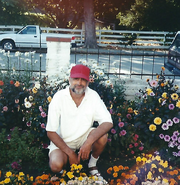 Bussewitz playing the didgeradoo, a wind instrument from Australia.

Note: The hat depicted was NOT found with Bussewitz.

Note: The hat depicted was NOT found with Bussewitz.