Box Elder County John Doe is a Greek male who was killed in a construction accident.

In 1901, the Southern Pacific Railroad proposed the "Lucin Railroad Cutoff" to reduce the time and distance involved in travelling from Ogden Utah, to Promontory, Utah and around the northern shore of the Great Salt Lake into northwestern Utah, southwest Lucin, Utah, and westward to Nevada. Construction on the project began in March 1902. Over three thousand workers constructed twelve miles of the cutoff on a permanent trestle and fill over the Great Salt Lake. Passenger traffic began on September 18, 1904 and the railroad was heavily used during World War I and World War II. It is currently in use by the Union Pacific Railroad.

However, on February 19, 1904, at Jackson Point, a station on the Ogden-Lucin cutoff and eighty-one miles west of Ogden, an eastbound train collided with a construction train which was parked on a siding and contained two carloads of dynamite. The explosion that resulted was felt like an earthquake in towns miles away and the telegraph station at Colon, Utah, which was fifty-five miles away, had every window pane broken.

Twenty-four construction workers were killed and fifteen were injured in the accident. Of those twenty-four, sixteen were of Greek descent and this victim is the only one that wasn't identified. Most of the victims were buried in Mountain View Cemetery, now known as Leavitt’s Aultorest Memorial Park and Mausoleum, in Ogden, Utah. A memorial was dedicated on October 22, 2000 by the Transfiguration Greek Orthodox Church in Ogden and the Hellenic Cultural Association in Salt Lake City at the Ogden City Cemetery in Ogden. 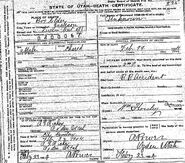 Part one of a newspaper article covering the accident.

Part two of a newspaper article covering the accident.