"Body 26" is one of five unidentified victims of serial killer John Wayne Gacy.

The victim was located in the southeast corner of a mass grave site in the crawl space of Gacy's home at 15:45 on December 29, 1978. This decedent was buried face-downwards in the crawl space, approximately two feet, seven inches beneath the surface of the top soil. The victim was completely nude. Material described as "cloth-like" was discovered lodged in his mouth, most likely causing him to die of suffocation.

This victim was most likely killed between June 13 and August 6, 1976, based on the communal grave in which he was buried. The victim was found buried directly underneath the bodies of Rick Johnston (Body 23) and Jimmy Haakenson (Body 24). Both victims, the latter identified in 2017, are believed to have died on the final day of the estimated death range.

Based on Gacy's history, Body 26 was likely lured to the home or abducted after encountering the serial killer at an unknown location within the city of Chicago. Each victim was tortured and sexually assaulted. 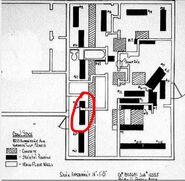