Suspected homicide
Blount County Jane Doe was a young woman found deceased in 2003 in Tennessee. She was possibly the victim of a serial killer, although the cause of death could not be determined.

The female's remains were located by surveyors in a wooded area, near a creek, near the Knoxville Airport on March 25, 2003. Her bones had been scattered around the area, and her lower jaw was not recovered. She is believed to have died sometime between 1998 and 2002.

Thirty bones were recovered between March 25 and 26. Nine others were found in December 2006 at the scene, following the assignment of a new detective. The original location where the female was left or died was also determined. It is believed changes in water levels were at least partially responsible for the disarticulation of the skeleton.

Most of the woman's clothing appeared to have been distributed across the country. However, some clothing at the scene indicated a relation to the medical field, and they were traced to establishments in Chicago and Oak Lawn, Illinois.

She may have originally been from a northern region of the United States. Speculation about her fate includes her being the victim of an unspecified serial killer. The offender may have been a trucker passing through the area who selected hitchhikers and prostitutes as his victims. Despite this, the exact cause and manner of death remain a mystery. 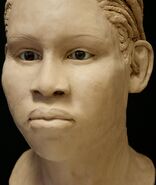 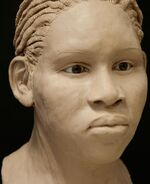