Bexar County Jane Doe was a young woman whose body was discovered in 1990. She is also known as "Cantu" for the potential surname written on her clothing.

The woman's body was found in a drainage ditch in 1990. She had suffered trauma to the left side of her face, most likely from a blunt instrument. Her cause and manner of death has not been released, yet she most likely was murdered or died from a pedestrian versus vehicle collision. 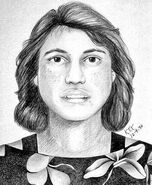