Beaver County Jane Doe was a woman whose embalmed, severed head was found in a wooded area in 2014.

Her head had likely been severed by someone with anatomical knowledge and her eyes had been replaced with red rubber balls, which is inconsistent with the funeral industry. However, the method in which she was embalmed suggests that it was done in a funeral home rather than a medical school or something similar.

Traces of a medication used to treat heart failure was found in her system and she may have passed away from a heart condition. Foul play is not suspected in her death. 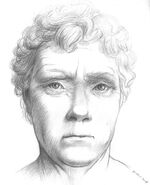