Barren County Doe was a child found deceased in Kentucky in 1989.

An employee of the Army Corps of Engineers found the skeletal remains of a child in a suitcase on the shore of Barren River Lake, 5 miles south of Glasgow, Kentucky on US 31-E. Kentucky State Police received three calls from someone claiming to be an attorney who asked that immunity be granted to a woman who had information about the child. After those calls, no more were received. 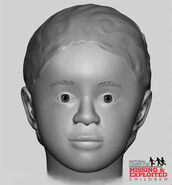