Baltimore Jane Doe was a woman found unconscious in an alley in 1987. She eventually died in a local hospital.

The victim was found topless in an alley behind 4809 Pennington Avenue in Baltimore, Maryland on the evening June 16, 1987. She had been riding in a car with an unidentified person who dropped her off at said address and drove off.

On October 29, 2017, a man with the first name of "Curtis Lee" told Carl Koppleman he believes the unidentified person is his mother, Rhonda Jones. His sister confirmed she had a tattoo of a turtle. 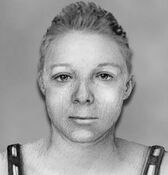