"Baby Girl" (nicknamed by investigators), was found in 1985 in Campbell County, Tennessee. Her death cause is not known and only thirty-two of her bones were found. 33 girls have been ruled out as the decedent.

The remains were located in a garbage dumping area near an abandoned shaft mine. Only a partial amount of remains were found, as they had been scattered by animals down the slope of a hill. Investigators believe that the individual or individuals responsible for disposing her body were likely familiar to the area, as the road she was left near would be difficult to come across by chance.

Recent testing indicates the girl was born and raised in Florida or central Texas for the first few years of her life, but she later moved elsewhere in the country. Such places have been estimated to be the Midwest, Rocky Mountains, Southwest or Pacific Coast states. She was not likely in Tennessee for long.

It has been theorized she was a victim of the Redhead murders, although her cause of death couldn't be determined. It is, however, suspected she met with foul play.

Reconstruction without jewelry near the body.

Reconstruction by University of South Florida 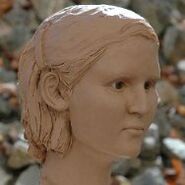 Bracelet found near the remains, which may not have belonged to the victim.

Fragment of overalls near the scene, which possibly belonged to the girl 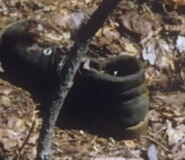 One of two boots near the scene, which possibly belonged to the girl