Homicide
Artesia Jane Doe was a female whose body was discovered in a rural part of Graham County, Arizona, near Artesia, in the fall of 2020.

The female's decomposed body was discovered on the property of a ranch, near the cities of Artesia and Stafford, Arizona. A specific postmortem interval is not listed, yet it is believed she died in 2020. Her body was wrapped in a tarp and placed in a float box, and there were toys near the body.

After she remained unidentified for several months, investigators released enhanced images of her clothing and made appeals to the public to submit tips.

It was later revealed the victim had been murdered, and her maximum age was increased to 22, formerly listed as 17. 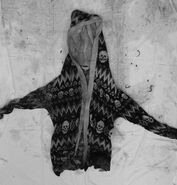