Suspected homicide
Anne Marie "Annie" Lehman (August 1954 - 1971) was a teenager found deceased in Oregon in 1971. Before her identification, she was coincidentally known by the nickname "Annie Doe." Her identification was aided by the DNA Doe Project. The only available image of Lehman was taken in 1969.

Lehman went missing in 1971 at age 16 from Aberdeen, Washington in the winter or spring. The circumstances surrounding her case are unclear, although it is rumored she was a victim of human trafficking.

However, her sister, Virginia, recalls seeing her sister packing luggage. Virginia asked why her sister was packing her stuff, and where Annie was going. Annie told Virginia, "with her." Annie then motioned to a slightly older woman. The woman was tracked down and told a relative Annie had been possibly taken to San Francisco, and that she was sold into the sex trade.

Lehman's scattered remains were found by a man and his son, while they were mushroom hunting off the Redwood Highway, near mile marker thirty-five.

The area is known as a dump, near the California-Oregon border, and Lehman's remains were somewhat covered in debris. She was nicknamed after the musical production "Annie" because of her auburn-brown hair, by artist Joyce Nagy, who created clay and two-dimensional renderings.

It is unknown what circumstances led to her presence in Oregon.

An examination of Lehman's remains revealed several clues and characteristics.

Her teeth were slightly crooked, and her front incisors were "buck teeth," the teeth also protruded slightly. She also had amalgam fillings in four of her molars. Based on her third molar development, it is likely she was 14 - 22, as opposed to 14 - 25.

Her hair color was a natural auburn to reddish-brown with blond, dyed streaks, as some hair was found with the remains, which was the only thing known about her physical appearance, as well as DNA analysis revealed she may have had brown eyes.

Lehman's remains were clothed in unique jewelry and clothes, such as a pair of jeans, a turtleneck sweater, and brown slip-on shoes.

The brown slip-on shoes Lehman was wearing were a size 8 1/2, which would be about size 8.5 in decimals. The shoes were "PRIMSTYLE" brand and had gold buckles. The shoes were dark brown. Lehman was found wearing a checkered, hounds-tooth waist-length coat. The coat had an alternating pink and brown, with a belt on it. There were several red-brown buttons on it as well. The blue Wrangler jeans she was wearing were size 13-14, typically for a slim, skinny person.

Her turtleneck sweater was tan or beige and had a zipper in the back. The Lovable brand bra was 34B, the color of white, and consistent with a mesomorph body. She was also wearing striped underwear with shades of purple, blue, and white.

Lehman was found with two unique pieces of jewelry; a silver "STERLING" ring, and a mother of pearl ring. The silver ring was Sterling brand and had the letters M-H stamped into it. This ring is considered a friendship band, and it can also be a pre-engagement band for a relationship. The other ring was a mother of pearl stone with a silver braid, and the letters "A.L," scratched into the stone. 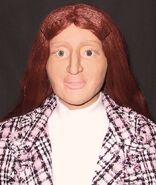 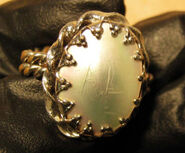 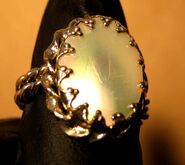 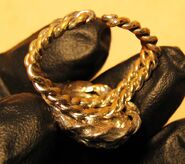 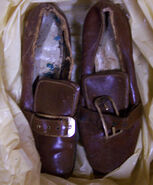