La Niña de la Maleta (The Girl in the Suitcase in Spanish), also known as Angela, is the nickname given to a girl found murdered in Delegación Cuauhtémoc, Mexico City in 2015.

Angela's body was found inside in a Ralph Lauren suitcase in Cuauhtémoc, México City. Various witnesses claimed that a man left the suitcase two days prior to her body's discovery. She had been sexually assaulted and beaten severely. The autopsy determined blunt force trauma as the cause of death.

Despite an exhausting investigation by police and high publicity of the case, the girl still remains unidentified and nobody has claimed the body. The case is considered cold.

CCTV image of the man witnessed leaving the suitcase on the floor.

A Ralph Lauren suitcase, similar to the one where Angela was found. 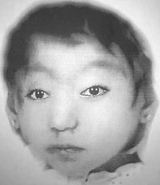