"Andrea" was the possible name for a teenager or young woman found murdered in Cedartown, Georgia in 2003.

The victim was discovered in a residence after an explosion. She had been shot in the mouth and her hands were duct-taped behind her back. There were two additional male victims that were discovered alongside her. They were killed after they refused to pay for drugs they were given. A conviction has been made in this case.

People who knew her stated that her name might have been Andrea. 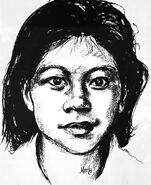