Gunshot (homicide)
Alvarado John Doe was a man found shot to death along Interstate 35 in Texas during April 1989.

The victim was believed to have been forced to walk to the site where his body was later found by a man who stopped along the roadway. He was shot up to seven times with a .38 pistol.

A witness contacted police to inform them that they recognized the clothing he wore as belonging to an individual observed at a nearby gas station accompanied by a Hispanic man with a heavy build with long hair, wearing a tan shirt and oversized green pants. The men were associated with a white-colored Ford truck with unpainted sides that carried a "large, blue water container" on its side. 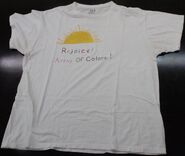 Victim's shirt, possibly originating from a religious or LGBTQ+ group.