"Alejandro Martinez" was the unverified name of a man found by the U.S. Border Patrol in Lyle Canyon in the Huachuca Mountains near Sierra Vista, Arizona. He was unrecognizable due to insect and/or animal activity.

In May 2017, FBI fingerprint records matched the victim to a man who provided law enforcement with this name and another name, "Florentino Martinez". He also provided his birthdate as March 6, 1968 and birthplace as Mexico. He is buried in Section N of Calvary Cemetery in Douglas, Arizona. 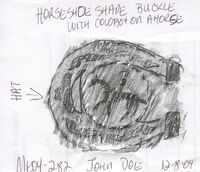