Gunshot (homicide)
Alameda County Jane Doe, also known as Mowry Wetlands Jane Doe, was a woman whose skeleton was discovered off on Mowry Avenue in Newark, California in 1985.

Jane Doe's body was cremated. Polaroid pictures of the skull served as the basis for facial reconstructions. Rootless hair of the decedent was used for DNA extraction, which was performed by Astrea Forensics in Santa Cruz, California.

Genealogy testing by the DNA Doe Project found that she has ancestral ties to the Midwestern United States. Her mother was identified as the late Marian Marie Richardson, a woman who lived in a small town in Missouri near the border with Kansas. A half-sister living in Texas was also located but she was adopted when she was just one month old so it is believed that Jane Doe was likewise adopted as a child. 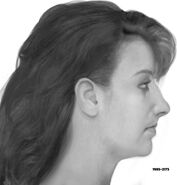