Alachua County John Doe was a young man that died in a vehicle crash after being chased by police.

The decedent was killed on Interstate 75 after crashing into a concrete barrier in the process of attempting to evade police during a high-speed chase. Extreme burns and major facial and skull trauma sustained in the crash rendered his body visually unrecognizable.

At the time of the crash, the decedent was driving a 1986 Chevrolet Corvette that had apparently been stolen from a dealership in Clearwater, Florida, roughly two hours southwest of Micanopy. He may have also been seen alive earlier at a gas station in Brooksville, Florida, and witnesses described him as an "Italian-looking" young man who was shirtless and wearing blue jeans. 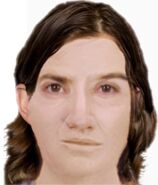