"Adam" was a boy murdered in England in 2001. It is believed he was a victim of human trafficking and was transported to the region from Nigeria, specifically for a ritual sacrifice. Only his torso was recovered.

On 21 September 2001, the dismembered torso of a small child was found in the River Thames in London. He was between four and seven years old and was wearing a pair of bright orange shorts that had been distributed and sold exclusively in Germany.

An autopsy revealed that the boy, nicknamed "Adam," was poisoned with a compound that paralyzed him before his throat was fatally slit. His blood was then drained from his body and his head and limbs were removed. It was determined that he was most likely from southwestern Nigeria and had only been living in England for a few days before his death. It is believed he was murdered as part of a ritual sacrifice.

In 2002, a woman named Joyce Osiagede came to police in London and claimed to have fled a Yoruba cult in Nigeria. She claimed to know Adam and stated that she cared for him while living in Germany. Her claims were backed up by a German social worker, who saw a malnourished boy living with Osiagede on multiple occasions. A pair of shorts identical to those Adam was wearing were also found inside of Osiagede's home.

Through Osiagede, police were able to track down a man named Mousa Kamara, better known by the alias Kingsley Ojo. A search of Ojo's home revealed several ritual items, although none of them could be connected to Adam's death. He was eventually jailed on human trafficking charges after it was revealed that he lead an organization that smuggled hundreds of people- including children- from Nigeria to England. Both Osiagede and Ojo were eventually deported back to Nigeria.

In 2011, Osiagede revealed that the Adam's real name was Ikpomwosa, and she provided authorities with a picture of the boy. She also admitted to giving him to a man named "Bawa"- later identified as Ojo- to take him to London. Two years later, it was revealed that Ikpomwosa's real name was Patrick Erhabor, and many news sources claimed he had been positively identified. However, police doubted Osiagede's claims. The supposed picture of Erhabor was actually of her friend's son, who was alive and living in Germany. Although authorities believe that Osiagede cared for the boy and Ojo was likely involved in his death, Adam has never been identified.

Reconstruction depicting the shorts and recovered remains from behind. 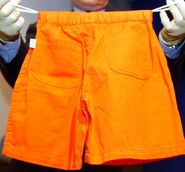