Adam, Victim 3, or Victim A was a teen or young adult who was murdered by serial killer Larry Eyler in the early 1980s. He was found buried near Johnny Brandenburg Jr., a previously unidentified victim.

"Adam" was allegedly picked up in Terre Haute, Indiana during July 10-16, 1983. Eyler claimed he paid the victim $75 for a "sexual act." Eyler drugged him and stabbed him to death in a nearby barn. It is theorized Adam was native to cities such as St. Louis, Missouri or Chicago, Illinois. 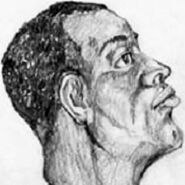